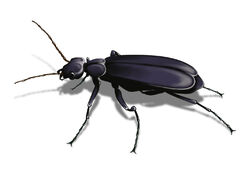 Placing a beetle on the board adds an autonomous unit to your game that can move outside ordinary turn structure. Due to color differences, team is constrained by genus. For example, the cyphochilus beetle may only be on the white team, dendroctonus beetles (most beetle genera, in fact) must be on the black team.

Retrieved from "https://chess-fanon.fandom.com/wiki/Beetle?oldid=4932"
Community content is available under CC-BY-SA unless otherwise noted.